From StoRM GridHTTPs server version 3.0.0 the WebDAV service is provided at: instead of:

Each Storage Area that supports HTTP or HTTPS transfer protocols can be accessed through the WebDAV interface provided by the StoRM GridHTTPs server component. This WebDAV interface conceals the details of the SRM protocol and allows users to mount remote Grid storage areas as a volume, directly on their own desktop.

Web Distributed Authoring and Versioning (WebDAV) protocol consists of a set of methods, headers, and content-types ancillary to HTTP/1.1 for the management of resource properties, creation and management of resource collections, URL namespace manipulation, and resource locking. The purpose of this protocol is to present a Web content as a writable medium in addition to be a readable one. WebDAV on Wikipedia and the WebDAV website provide information on this protocol.

In a few words, the WebDAV protocol mainly abstracts concepts such as resource properties, collections of resources, locks in general, and write locks specifically. These abstractions are manipulated by the WebDAV-specific HTTP methods and the extra HTTP headers used with WebDAV methods. The WebDAV added methods include:

While the status codes provided by HTTP/1.1 are sufficient to describe most error conditions encountered by WebDAV methods, there are some errors that do not fall neatly into the existing categories, so the WebDAV specification defines some extra status codes. Since some WebDAV methods may operate over many resources, the Multi-Status response has been introduced to return status information for multiple resources. WebDAV uses XML for property names and some values, and also uses XML to marshal complicated requests and responses.

Starting from EMI3 version, StoRM GridHTTPs server exposes a WebDAV interface to allow users to access Storage-Areas data via browser or by mounting it from a remote host.

GridHTTPs’ WebDAV implementation is based on Milton open source java library that acts as an API and HTTP protocol handler for adding the WebDAV support to web applications. Milton is not a full server in itself. It is able to expose any existing data source (e.g. CMS, hibernate pojos, etc) through a WebDAV interface.

As seen in the chapter before, through a WebDAV interface we are allowed to manipulate resources and collections of them. So it is simple to understand that a WebDAV resource for StoRM GridHTTPs WebDAV implementation will be a file, while WebDAV collections will be directories of a file-system. Every WebDAV method needs to be mapped to one or more SRM operations that have to be transparent to the final users. StoRM GridHTTPs maps the HTTP/WebDAV methods with the SRM operations as shown by the following table:

For each method, a 401 Unauthorized can be obtained if user doesn’t provide the necessary credentials.

The WebDAV interface is provided by StoRM GridHTTPs component. Therefore, if you want to install a WebDAV access point to your data you have to install StoRM GridHTTPs metapackage RPM (do not forget to satisfy all the pre-requisites shown in the sys-admin guide before):

To configure storm-gridhttps-server you need to fill the requested YAIM variables as described in the basic and advanced StoRM GridHTTPs sys-admin configuration guides. A good explanation of the required YAIM variable is available in:

The service needs to be installed on a machine on which storm file system is mounted. If you need, you can install the StoRM GridHTTPs on differents hosts (that share the same data, e.g. hosts are GPFS clients) and use them as a pool (see StoRM BackEnd configuration on sys-admin guide). To start the service:

The StoRM GridHTTPs WebDAV server listens on two ports, one for the unencrypted HTTP connections and another for the SSL encrypted HTTP requests. Their default values are:

You can also develop a client on your own, for example by using the Apache Jackrabbit API.

Users can use browsers to easily read data of storage areas that are:

Using a browser, users can navigate through the storage areas’ directories and download/open files.

The best way to use the WebDAV service is using cURL command. cURL is a command line tool for transferring data with URL syntax (see cURL website). With cURLs we can do anonymous requests or provide our x509 credentials: personal certificate, plain Grid proxy, VOMS proxy. The following examples suppose that user has his/her personal certificate (usercert.pem) and key (userkey.pem) in $HOME/.globus directory, and his/her proxy in $X509_USER_PROXY.

and knowing that unencrypted connections have 8085 as default port, the following table show various cURLs, one for each HTTP/WebDAV method.

If you need to present an x509 certificate to be authorized, you can add to your cURL command the following options:

For example, assuming that:

and knowing that encrypted connections has 8443 as default port, we can perform a cURL like this:

and retrieve the list of file/directories in the root directory of the storage area A.

If you need to present an x509 proxy - plain or with VOMS extensions - to be authorized, you can add to your cURL command the following options:

For example, assuming that:

and knowing that encrypted connections has 8443 as default port, we can perform a cURL like this:

and retrieve the list of file/directories in the root directory of the storage area B.

There’s a useful Firefox plugin, named RESTClient, that can be used as a debugger for RESTful web services. RESTClient supports all HTTP methods RFC2616 (HTTP/1.1) and RFC2518 (WebDAV). You can construct custom HTTP request (custom method with resources URI and HTTP request Body) to directly test requests against a server.

To connect to HTTP readable storage area you can use several clients. One of this is Cyberduck. Cyberduck is an open source FTP and SFTP, WebDAV, Cloud Files, Google Docs, and Amazon S3 client for Mac OS X and Windows (as of version 4.0) licensed under the GPL. To configure it, add a new connection and insert:

This configuration is the same for lots of WebDAV clients, alternatives to Cyberduck. 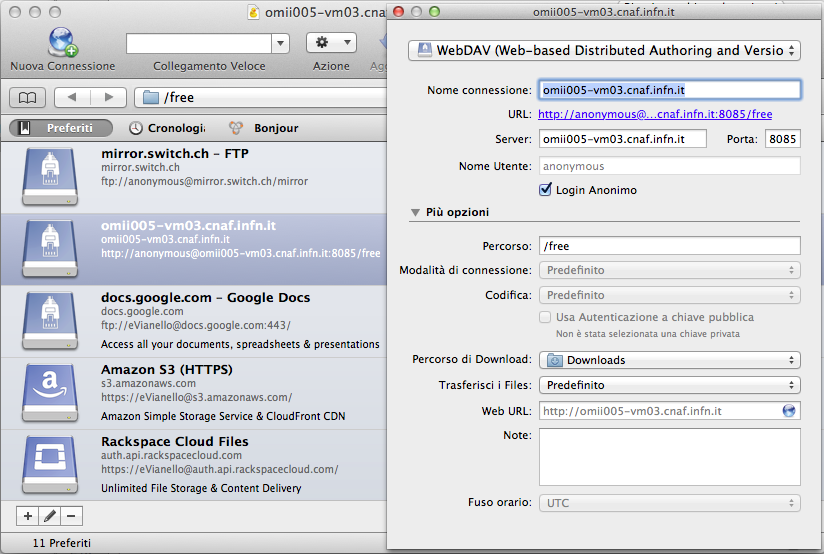